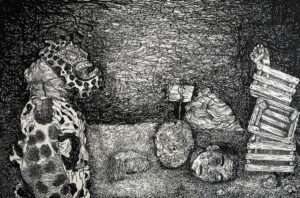 Mexico: the desire that corrupts

The Mexican artist and engraver Orlando Velázquez seeks to portray the moment in which the bond that connected man with his habitat was broken. “The earth is the beginning and the end of all things,” he says wistfully. He regrets that, as a result of conflicts such as drug trafficking and the war on drugs, the land is no longer perceived as something sacred but rather is conceived in a merely instrumental way: as a resource with which gets richer. And against that worldview, he fights.

Orlando was born in the state of Guerrero, in Mexico, and experienced firsthand the peaks of violence that were generated as a result of the so-called “war on drugs.” This path runs through his series El deseo que corrompe, where he portrays the violence produced by the lust for power. The project was made possible thanks to a grant from the National Council for Culture and the Arts (Conaculta).

Orlando wanted to illustrate this tragedy in the terms of Dante Alighieri: “I wanted to confront the idea of ​​ancient hell with my vision of hell on earth from the study of human behaviors more contemporary than those of Dante’s hell,” he says. The son of a goldsmith, Orlando works long hours in a small workshop that he has in his house. He is meticulous and persistent in trying to capture human behaviors and emotions. 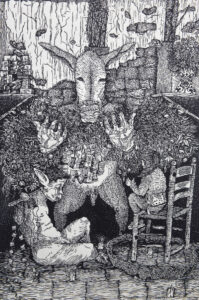 How did you arrive at the concept of El deseo que corrompe?

When I started this project, I remember the wave of violence in the country, which was stronger than now. And it was all mainly because of this question of the fight in the squares of the cartels: the question of power was what was leading to these violent situations.

I already brought with me a taste for Dante’s The Divine Comedy. I wanted to return to the infernal idea that, in The Divine Comedy, is represented as the circles of hell, where people are tortured.

It raised the question of human behavior: how desires led to these torments. There I returned to the idea, because I was already seeing it here, in my country and I was seeing it in everything, in the streets, not only in the newspaper: everywhere you could see the death that was being generated. 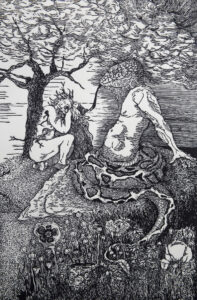 You took The Divine Comedy as a reference but you Mexicanized it.

Yes. I wanted all that imaginary to refer to Mexico. That is why in some of the images there are musicians playing and a tree burning. I wanted to go back and do a little fusion of ancient hell with my vision of hell here in Mexico.

I finished a scholarship and was focusing more on the study of human behavior. In the previous project I had started with the study of capital vices. But I did not consider them vices, but as behaviors that prevail in human beings. The idea I had was to represent my vision of hell, but moving away from posing it as a place after death, but rather as an earthly hell. The idea was to confront the idea of ​​ancient hell with my vision of hell on earth from the study of human behaviors that are more contemporary than Dante’s hell. I proposed to work with the concept of the “horror of emptiness” and the behaviors that were generated. I proposed working with anxiety, fear, attachment and anger. 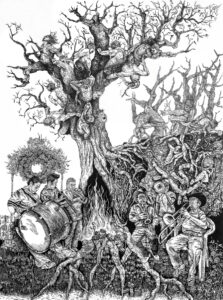 What are you working on now?

The scholarship tutors suggested that I try a type of solution that was more responsive to emotion. That is why I began to explore another type of drawing that was more gestural and focused on emotion. In other engravings, I think everything was more descriptive, more illustrative: they generate a narrative from a lot of characters. And, in these, the intention is that it remains as the pure register of emotion. 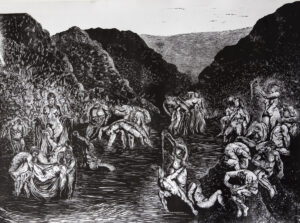 How is the process? Do you first make a sketch, do you draw it?

Yes, it is a very caring process. I like to draw it directly, to build the image directly on the plate. I do not make preliminary sketches. The plates are made of wood. Some are one meter twenty by ninety centimeters. There is an engraving that measures one meter eighty with forty centimeters, some that are a little smaller.

For the one meter by ninety centimeter prints it takes about a month, I think. Between planning the drawing and the carving. On the plates, which are about forty by sixty I think it takes about eight days. 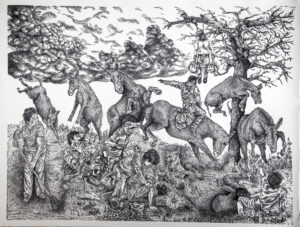 It is an activity that requires being very focused, right?

Yes, the truth is yes. Most of the time I spend here in this little workshop. It’s a lot of work, a lot of planning hours. Notice that I have always believed that the most difficult thing is how to compose the piece. The technical question of how it will develop for me is a little simpler. What takes me the most time is planning and drawing everything because I don’t make previous sketches. I would say that it is the part that I like the most, the creative process, that is coming out. When something suddenly comes to mind and right there I correct it. 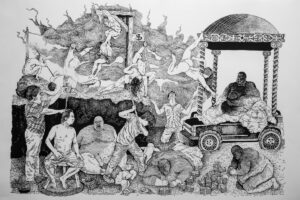 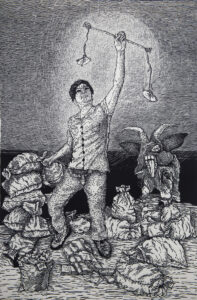 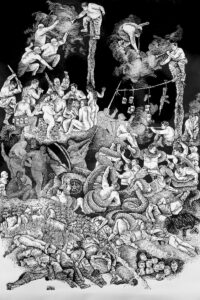 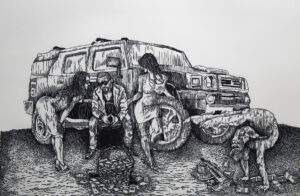 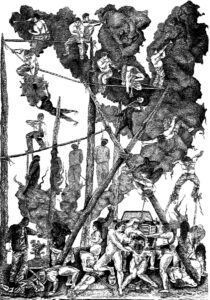