From the Amazon to the Arctic, in search of the nature that inhabits me

“There are people who have the possibility to translate nature with their language. Not only with their customs and bodies but with their language, not only with the direct but with the metaphorical one”, says the photographer Erika Larsen. Tracing that connection is the pursuit of her life. She does so with a camera in hand and guided by her emotions only, which lead her to explore from the spirit of a forest, to the particular luminosity that occurs between the trees when an animal appears, or the sounds by which a hunter is guided. After many years living between the jungle and the Arctic, the images of her seem to speak that secret language of nature.

When she was about ten years old, she held in her hands a photograph that her father had taken. It was from Saturn and that impressed her. She found it crazy that this planet was so far away and, at the same time, was made up of the same chemistry as ourselves. Perhaps there began the holistic notion that Erika holds about humanity, nature and life. When she realized that this feeling was possible thanks to a photo, she understood that photography was a tool that would help her understand who we are.

She was born in the United States but lived in various parts of the world, always in search of intense links between humans and nature. Between 2001 and 2006 she produced The hunt, a work in which she discovered that the calm that surrounds the hunters has to do with their listening to the land and communicating with the animals. From 2007 to 2011 she lived much of the time with the Sámi community, a village in the Scandinavian Arctic. She lived with a family, she accompanied them on their hunting days and in their daily activities: observing the animals, cooking them, separating their skins. So she did the series Walking with reindeers.

Erika also did multiple reports for National Geographic and her photographs have been exhibited throughout the world. In one of the series (Women of Impact) she portrayed a wide variety of protagonists, from the Speaker of the United States House of Representatives Nancy Pelosi to the Nigerian writer Chimamanda Ngozi Adichie, including the activist for the climate Tara Houska and the president of the European Central Bank Christine Lagarde. Women were always an issue. Thanks to taking photos of her grandmother, for example, she discovered that photography is a way of breaking time, a way to understand the world.

Can your work be defined as a search to tell the way in which men and women relate to nature?

For me, it has been a path of my whole life, since I was a child. I think that we are on a path to travel our “who are we”. I am on a way to remember this. On the one hand, it is very easy and on the other it is very deep. I always keep this memory and this feeling: my soul, my heart, my skin, we are nature. They are not different things, it is not “below” or “above”, nature is what we are.

It’s easy to say but remembering this implies a lifelong journey. When I tell stories I am always focused on people who have a very strong relationship with nature because they help me a lot to understand and translate their memory. I believe that we are in a very large network, connected with all the other people in the world. Each person has their own memory, his/her own work to remember who we are. Each person has a special part of this memory. When I learn about someone’s culture, they are helping me understand the big picture of who we are. Since I was six years old, I have had this question and it is clear to me that the signal is on earth. The question is: who am I in relation to our collective history. 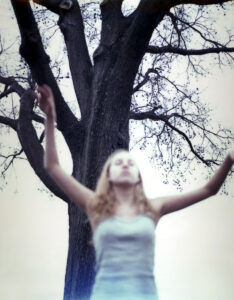 When did you discover that photography could be a good tool for this search?

Maybe when I was eleven years old or so. I saw a photo of Saturn that my dad had taken. I had that photo in my hand. When I saw that planet I thought ‘how crazy!’ Because it is far away and it is another world but I felt that this planet was also me: I have the same chemistry as the planet, it is part of me. But why did I have that feeling? Ah! For the picture! Then I understood that photography was also a tool to help us remember. Photography is remembering who we are.

I studied photography in my town, near my house and I attended the University of photography. When I was 21 or 22 it was the first time I started a project. It was about hunters in America. I spent a lot of time in nature with them. Those hunters were guides to get closer to nature.

To hunt we may need a week, a very deep week in nature. You need to know where the deer is, what the path is like, its steps, understand its environment and all that. During the eight years that I did this project I felt that my body changed a lot. I was more alert, I could feel the past, future and the present time in a moment. All is united, I was just one more instrument. After the hunters project I had the question of who we are in this cycle of life and death. 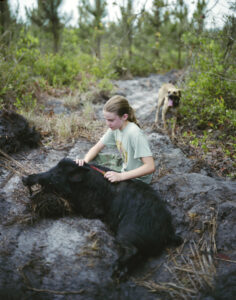 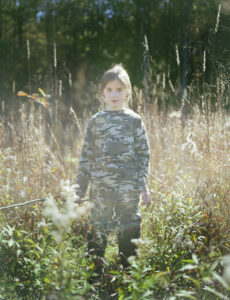 How did you produce the Arctic work?

My search started around the South American jungle. After I arrived in the Arctic, that was the process. I think deeply in the Arctic: Who are the people that work in the Arctic? My dad is from Norway, so I make contact with three women and all of them answer me. One of them told me: “it is possible to visit me but I need a person that can help me with the language”. I visited her for two weeks and she opened up her world a lot. There started a four-year venture in the Arctic.

In the first year I went and came back from New York to deepen my relationship with them. Because it is not possible to say “ah, I want to live with you for four years”. I needed to strengthen my money account, I had quit my job and everything. I looked for scholarships, etcetera. On one of those trips I found a family in Norway who needed a viga, a word in their language that means a woman who does things around the house: take care of babies, wash dishes. This woman helps in the tundra, in that process to kill the reindeer, cook the reindeer. I even learned how to sew reindeer skin.

This family from Norway is very modern but they also had very strong roots with their culture, they needed a viga, it was a very important opportunity. I lived with them for three years, I learned the Sámi language. I took most of my photos with them.

But the most important thing to me is to see all their relationship with nature. It does not exist in something “rare”, a great ritual. It exists in their daily life. It was another world, other thoughts, another knowledge. That daily life was their ancestral culture and their modern culture. They gave me an opportunity to see various worlds with them, I am very grateful. They gave me free room to live in, free food and things like that. 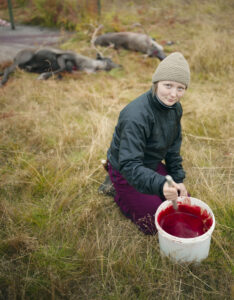 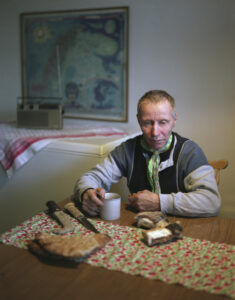 What did they think of what you were doing?

I am not inside their heads but, for years, of course, we argued on this subject. The family was happy that I was in the house, I helped them a lot with their stuff. They are like my family, and I know they have the same feeling: I am not a foreigner. They know that their culture and their connection with the environment is something very special. That is why I believe they give me a lot of confidence to learn who they are. They know that my tools to learn are my photos and my videos.

It’s like they know they have something very special and unique. Of course, they have their own storyteller but I’m sure they think it was important that a person outside their culture also saw who they are. We talk a lot about it: through my eyes I saw something very different from what they have the possibility of seeing. With foreign eyes they could see other things about their lives. It is a mirror a little bit different. 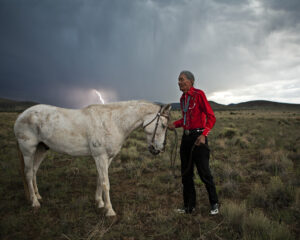 You are about to launch a project called  Materia prima (Raw Material), what is it about?

The first time I visited the Peruvian jungle was for this project that, finally, I did with the Samis. At the beginning I went to the jungle to understand or to look at the same thing. But it was not the right moment. At that moment I met my husband, he is from Perú. I have been with him for fourteen years now.

In April we are going to launch Raw Materia, which is fourteen years of work with breaks. My work is always the same topic but with different people who help me understand something. It is a slightly strange idea: I heard, somewhere, that we are in a new time, a very important time with a very strong connection with nature. There are people who are awake at this time, they are awake after a long sleep for a long time. We are waking up. We need to find a new language, a very ancient language, a language that all of us need to learn anew with symbols, patterns and sounds.

Since 2006 I look for these people, in their daily life, rituals, not a great show or a great movement. Maybe a woman in her kitchen. Maybe she has a way of expressing nature with a knife cut. I was looking for that kind of knowledge. I will publish it in April and it has many trips to the jungle and mountains, Canada, Alaska, Mexico, Peru, Bolivia, among others. 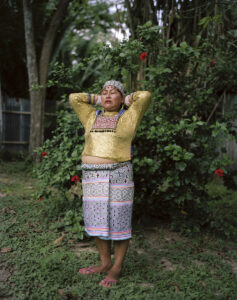 You have also done work related to your own family, how was it?

It is another branch of the same path. It is not possible to only look for teachers or guides outside, I also have to look in my own family and my own life. Since I was a teenager, when I was fifteen, I looked for and saw things in my own family, to help me understand life and death. For example, my grandmother. I was with her, I took some photos of her and, when I saw her photo, I saw on her face her way to another place, her way to another stage, another different level. Another state of being. That year she died.

The most important thing for me is that I discovered, with these things, that the camera and the photos have the ability to bring us to another time. The camera is a way of destroying time, breaking our perception of linear time. It becomes a tool to break time.

These photos with my family helped me a lot to understand how I would use my camera. I have photos with my sister, because two of my sisters died. With the photos of her, I saw the future, the past and the present. The camera has the ability to bring us closer, to perceive time. It is like a vehicle. 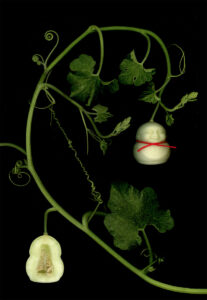